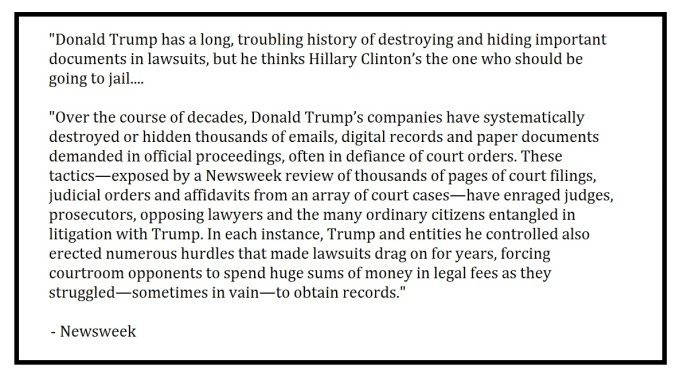 Trump claims to be very successful, a great winner, who’ll make America dominate global markets again, bringing prosperity and stability for citizens at all socioeconomic levels. But, how often has Trump won? 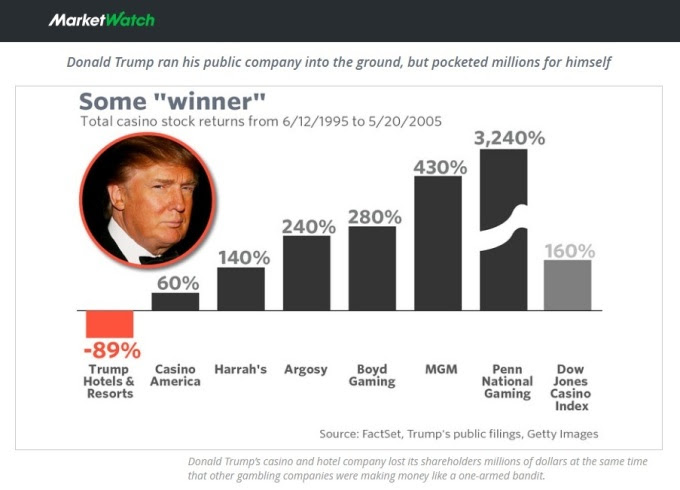 To elaborate on just one example of his terrible mismanagement, consider the company he started to absorb the losses for his failing casinos in Atlantic City.  Between 1995 and 2009, the average investor in this organization experienced a massive loss from $35.50 per share down to $0.17.  Many contractors were not compensated for their work and casino bondholders lost a tremendous amount of money.  Trump pocketed $45 million during this period.

There’s a very public and long trail of major mistakes in his life history that harmed thousands of people:

“(We) found he has been involved in more than 3,500 lawsuits over the past three decades — and a large number of those involve ordinary Americans…who say Trump or his companies have refused to pay them….At least 60 lawsuits, along with hundreds of liens, judgments, and other government filings reviewed by the USA Today Network, document people who have accused Trump and his businesses of failing to pay them for their work. Among them: a dishwasher in Florida. A glass company in New Jersey. A carpet company. A plumber. Painters. Forty-eight waiters. Dozens of bartenders and other hourly workers at his resorts and clubs, coast to coast. Real estate brokers who sold his properties. And, ironically, several law firms that once represented him in these suits and others….The actions in total paint a portrait of Trump’s sprawling organization frequently failing to pay small businesses and individuals, then sometimes tying them up in court and other negotiations for years. In some cases, the Trump teams financially overpower and outlast much smaller opponents, draining their resources. Some just give up the fight, or settle for less; some have ended up in bankruptcy or out of business altogether.”

Through an investigation, Reuters found out these details:

“Donald Trump has a message for anyone who agrees to do a job for him: If I don’t like your work or I think you’re trying to rip me off, don’t expect to be paid in full….The strategy has left some small business owners who have done jobs for him over three decades of real estate deals saying they have felt cheated and don’t want to ever work for him again. In a number of cases they have also faced big legal bills from subsequent court action….Reuters reviewed more than 50 court cases and liens from contractors related to Trump projects in New York, Atlantic City, Miami and West Palm Beach, and interviewed dozens of people who have done construction jobs or legal work for him. The majority said they were paid in full and happy to work for him but at least a dozen said they had been left out of pocket or had watched as other contractors were short-changed. ‘I fight like hell to pay as little as possible,’ he said. ‘You can’t spend millions of dollars for something you could do for $2,000.’ Donald Gregory, general counsel for the American Subcontractors Association, a Washington-based trade group that represents individual building contractors, said renegotiating fees at the end of a job is not standard practice. ‘It certainly isn’t the run of the mill activity, even in this post-recession environment that has probably brought some poor habits to the construction industry,’ he said.”

Trump’s habitual stinginess has carried over into his presidential campaign, as told by Reuters:

“Republican presidential nominee Donald Trump has run an unusually cheap campaign in part by not paying at least 10 top staffers, consultants and advisers, some of whom are no longer with the campaign, according to a review of federal campaign finance filings….Those who have so far not been paid, the filings show, include recently departed campaign manager Paul Manafort, California state director Tim Clark, communications director Michael Caputo and a pair of senior aides who left the campaign in June to immediately go to work for a Trump Super PAC….The New York real estate magnate and his allies have touted his campaign’s frugality, saying it is evidence of his management skills. His campaign’s spending has totaled $89.5 million so far, about a third of what Democratic rival Hillary Clinton’s campaign has spent….But not compensating top people in a presidential campaign is a departure from campaign finance norms. Many of the positions involved might typically come with six-figure annual paychecks in other campaigns.”

Many public testimonies attest to his shady service offerings to “help” others get rich by applying his alleged genius entrepreneurial skills. He expects the voters to find his wealth impressive after receiving a $1 million loan from his father and $40-200 million inheritance and his father’s connections in the same industry. They both saved hundreds of millions through governmental financing programs. He acts like he supports the average person’s monetary success while officially submitting a future tax policy that disproportionately benefits the super-rich.

This fits neatly with his refusal throughout the campaign to release his tax returns, his stated reason being that he couldn’t do it until a routine audit was complete. To the contrary, the IRS stated there was no legal restriction preventing him from sharing this paperwork with the public and his own lawyers communicated that a half decade of returns from the mid-2000s could be shared in the meantime.

When his 1995 tax return was leaked in early October 2016, the voters got a shocking preview of what the rest of Trump’s hidden finances might look like.  Personally, not from a business expense, he had lost $900 million in just one year.  Trump’s response: 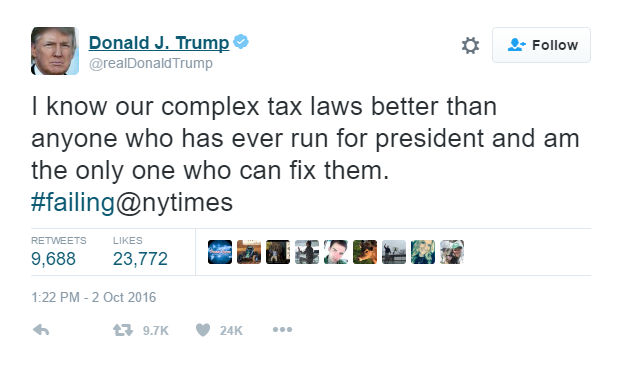 He had boastfully claimed just one week earlier in a debate with Clinton that his successful avoidance of paying taxes made him “smart”.  Tax experts have informed the media that such a tremendously large financial setback as he had in 1995 would mean that by law he probably would not have been required to pay any federal income taxes during the following 18 years.  This is a stark example of how Trump’s life experience is so incredibly dissimilar in comparison to the vast majority of Americans.  Many of those committed to and enamored with Trump think he understands their concerns and will be loyal in protecting their livelihood and making them prosper.  While citizens around the nation pay their taxes and thus supply needed funding for things like the roads, fire departments and police forces that provide services for communities and businesses like his, Trump likely has profited without contribution for almost two decades.  This is congruent with his personal use of other people’s money by what they thought were donations to charity through the Donald J. Trump Foundation.  The Washington Post conducted a detailed research project on this organization.  They found that he drew from this reservoir of cash numerous times for things not related to philanthropy at all.  Twice he bought himself presents, one of which was a 6-foot tall self-portrait painting for $20,000.  Research into the Foundation further showed:

“An investigation of the foundation — including examinations of 17 years of tax filings and interviews with more than 200 individuals or groups listed as donors or beneficiaries — found that it collects and spends money in a very unusual manner….For one thing, nearly all of its money comes from people other than Trump. In tax records, the last gift from Trump was in 2008. Since then, all of the donations have been other people’s money — an arrangement that experts say is almost unheard of for a family foundation….Money from the Trump Foundation has also been used for political purposes, which is against the law. The Washington Post reported this month that Trump paid a penalty this year to the Internal Revenue Service for a 2013 donation in which the foundation gave $25,000 to a campaign group affiliated with Florida Attorney General Pamela Bondi (R)….

“Behind the scenes, he was transforming the foundation from a standard-issue rich person’s philanthropy into a charity that allowed a rich man to be philanthropic for free….Experts on charity said they had rarely seen anything like it….’Our common understanding of charity is you give something of yourself to help somebody else. It’s not something that you raise money from one side to spend it on the other,’ said Leslie Lenkowsky, the former head of the Corporation for National and Community Service, and a professor studying philanthropy at Indiana University….By that definition, was Trump engaging in charity?”

One of the common self-promotional notes Trump tells his audiences is that his book, The Art of the Deal, lays out the brilliant insights at the heart of his commercial philosophy. He falsely claimed that it’s the best selling business text of all time. Other business books like How To Win Friends and Influence People and The 7 Habits of Highly Effective People have sold 10-25 times more copies. Tony Schwartz, the person who actually wrote the book, had to spend 18 months on the job with Trump to gather the content because Trump couldn’t stay on task during standard interviews.  Schwartz said:

“‘One of the chief things I’m concerned about is the limits of his attention span, which are as severe as any person I think I’ve ever met,’ Schwartz says. ‘No matter what question I asked, he would become impatient with it pretty quickly, and literally, from the very first time I sat down to start interviewing him, after about 10 or 15 minutes, he said, ‘You know, I don’t really wanna talk about this stuff, I’m not interested in it, I mean it’s over, it’s the past, I’m done with it, what else have you got?’…Add to that the fact that Trump is so easily provoked, that what Schwartz calls Trump’s insecurity ‘makes him incredibly reactive whenever he feels threatened, which is very, very often.’”

“Schwartz thought…’He has no attention span….it’s impossible to keep him focused on any topic, other than his own self-aggrandizement, for more than a few minutes…If he had to be briefed on a crisis in the Situation Room, it’s impossible to imagine him paying attention over a long period of time’…’Lying is second nature to him,’ Schwartz said. ‘More than anyone else I have ever met, Trump has the ability to convince himself that whatever he is saying at any given moment is true, or sort of true, or at least ought to be true..’..Schwartz says of Trump, ‘He lied strategically. He had a complete lack of conscience about it.’ Since most people are “constrained by the truth,’ Trump’s indifference to it ‘gave him a strange advantage.’”

Trump’s signature casino, the Taj Mahal, has long been at the center of controversy for failing to pay its taxes.  The New York Times has covered the details.  Over many years, the debt to the state of New Jersey grew to a level of about $30 million, including the late fees.  “The state had doggedly pursued the matter through two of the casinos’ bankruptcy cases and even accused the company led by Mr. Trump of filing false reports with state casino regulators about the amount of taxes it had paid.”  Beginning in the mid-2000s, Chris Christie and Trump became friends, even going on double dates with their wives.  Trump donated to two organizations that Christie was chairing.  In 2010, Christie became New Jersey’s governor.  By the end of 2011, the amount owed by the Taj Mahal was negotiated down to the startling low level of $5 million.  Legal experts interviewed by The New York Times commented that although negotiations and settlements are common in this kind of situation, a resolution that shrinks the total by more than 80% is very unusual.  The same article revealed something even more overtly disturbing: “A deputy New Jersey attorney general wrote in 2007 that…[the Taj Mahal] had reported that it paid $2.2 million in alternative minimum assessment tax in 2003, which was not true. It had paid only $500 in income taxes.”